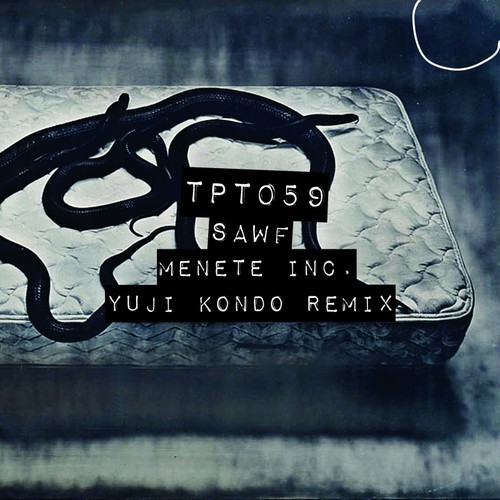 Sawf, Perc Trax’s most mysterious artist returns to the label he calls home after EP’s for Model Analysis, Audio Assault and M-Rec. This is his first new material for Perc Trax since his well received album ‘Flaws’ in 2011 and shows him introducing new influences to his trademark grinding, industrial sound.

First up is title track Menete, built around a 16th note synth line that recalls everything from classic EBM to more modern synth-led techno such as the recent Sleeparchive EP on Tresor. Closing the a-side is Toolio, a far too modest title for a track that is far from a disposable techno tool. An expert exercise in building percussion, this is closest to the sound people know from Sawf, but the best example of it yet.

Opening up the b-side is a remix from Yuji Kondo; know best for his work under both his own name and as half of Steven Porter on Semantica. The remix is everything you’d expect from Yuji. A wall of broken-beat noise topped off by cut up vocals samples and a fluid, ever-changing arrangement. Closing the 12” is ‘Diin’. A deeper, almost house-like cut from Sawf, building on a probing bass guitar line, proving he can do subtle and atmospheric as well as he does tough and confrontational.